AEEI is a majority black-owned and black-controlled investment holding company based in South Africa. The Group holds both national and international strategic investments across a broad range of industries, including marine, technology, health and biotherapeutics and enterprise development. Its support is strategically focused towards supporting Broad-based Black Economic Empowerment (BBBEE) within small, medium and micro enterprises (SMMEs).

AEEI is responsible for the appointment of the boards and management structures of all its subsidiary companies. It currently (both directly and indirectly) employs over 2150 employees and over 11 000 people; predominantly South African, benefit from its investments and associated companies. AEEI is a significant exporter and generates a large portion of income in foreign currency.

The Company has a growing international reputation as a founding member company of the World Economic Forum (WEF) New Champions and Community Global Growth Company (CGGC). AEEI is also a member of the Advisory Board of the Community of Global Growth Companies as well as the Green Growth Action Alliance (G2A2).

As a multi award-winning BBBEE Group, AEEI is the empowerment partner of choice for a range of small to large businesses, and it enjoys strong partnerships with multinationals such as British Telecoms South Africa, Saab South Africa, Pioneer Food Group (Pty) Ltd as well as Siemens, Microsoft and GlaxoSmithKline.

As a business founded on the principles of BBBEE, AEEI is firmly rooted amongst historically disadvantaged individuals (HDIs) and community organisations. These groups form the majority of the Group’s shareholder base. Black ownership of AEEI exceeds 80% and the majority of its economic benefits are enjoyed by black stakeholders. The Company is recognised by its peers as a pioneer in promoting the interests of HDIs and previously marginalised communities.

The Group’s commitment to transformation through employment equity, skills and enterprise development and corporate social investment, makes it a beacon of BBBEE.

MISSION
“A diversified investment company that empowers people through profits and partnerships.”

VISION
“We are a dynamic and innovative company that creates superior stakeholder value.”

AEEI’s business model and philosophy has resulted in it acquiring control of the majority of its operational investments as well as holding minority equity in strategic investments. This enables it to add value through its extensive expertise and networks, while promoting an entrepreneurial culture within its management structure and staff. Through our assets and investments, we drive the businesses to become efficient on a sustainable basis, which generates revenue, dividends and cash flow to support the Group as a whole.

AEEI’s investment decisions, across its entire portfolio are driven by the overall objective of creating and growing stakeholder value in a sustainable manner. This is achieved by ensuring all investments, be it acquisitions or organic growth projects, are subjected to review by the investment committee. The committee is well balanced, has legal, financial and strategic expertise. Investments are adjudicated to ensure it has both a strategic fit with synergistic benefits to the current portfolio and that the investment provides an acceptable level of return with a reasonable payback period (based on the specific industry).

Strategic road maps per sector invested has been developed within a five-year plan (Vision 2020 Vision) and each investment is adjudicated in line with its contribution to the aggressive growth plan mandated by the Board. 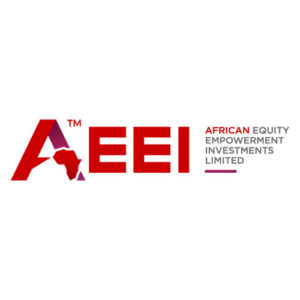